Birding in the Okanagan

We arrived in Kamloops after a bumpy flight over the mountains from Calgary. It was raining lightly on the tarmac when we got off the small propeller plane that we had flown on. We picked up our rental car and drove to Rattlesnake Bluffs in search of a Chukar. I scanned the cliffs and along the roadside with no luck although, we did get a Pygmy Nuthatch. We eventually decided to continue along to Kelowna. The landscapes were spectacular noting like the flat prairie land near Calgary. Logan Lalonde who we spent the evening birding with was not able too meet us for a few hours we decided to drive down Beaver Lake Road in search of Western Bluebirds we saw eight of them including a fledgling. We saw Lazuli Buntings, a very beautiful male Cassin’s Finch and two Say’s Phoebes.

We were required to check into our hotel in Kelowna before seven which gave us a reasonable amount of time to get to the Fatburger where we were going to met up with Logan Lalonde. Logan directed us to Bear Lake Road a small singing road used almost exclusively by reasearchers.  We drove the road for about two hours where we racked up a decent amount of species highlights included White-throated Swift, Lazuli Bunting, Nashville Warbler, Common Nighthawk and Dusky Flycatcher.

On the way down we at least twenty Common Poorwills am all time high count for the Central Okanagan region. Although we searched for quite a long time we could not find Flammulated Owl one of the main targets for the trip.

The next morning we woke up at 4:30 to meet Logan unfortunately he was unable to join us due to an injury but, he gave us directions to the location we were going to visit. We walked into the park/construction site we heard a few species singing including a Rock Wren. We walked I. Rutherford where we saw three Vaux’s Swifts and a small covey of California Quail.

We continued on seeing more Lazuli Buntings and Warblers eventually making it to the location of the recently discovered Yellw-breasted Chat found by Logan a few days earlier. We heard the almost undicribable song of the male Yellow-breasted Chat. We finally located the bird singing on an open brand a few meters in. 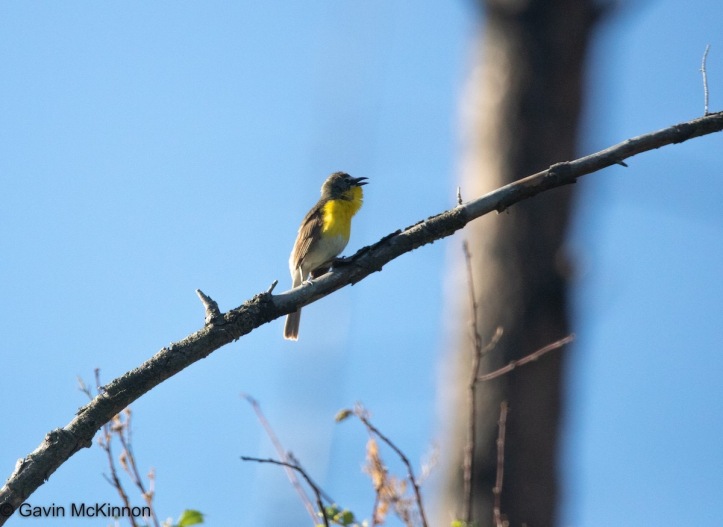 We continued to bird all the way to the Parking lot where we got into our car and drove to Planet Mine Road our last shot to see Lewis’s Woodpcker we saw two! That was the last new bird we saw in the Okanagan Valley. I’m now off to Banf and Jasper before returning to Calgary.